Hit enter to search or ESC to close

By Stacey Krolow October 4, 2019 No Comments

Hello Fall!!! We’re back with the third episode of the PepperCast, the video and audio series where Pepper’s badass CEO and Founder, Stacey Krolow, meets with some crazy talented creative entrpreneurs and photographers in the biz!

On this episode, Stacey talks to Kirk Mastin. Kirk is an incredibly talented photographer in Seattle, Washington. His photography career started in photojournalism, which is hella cool. He has had an amazing career since capturing beautiful portraits, has photographed countless weddings, and is a badass educator. In fact, he is hosting this year’s ARC conference in Vancouver, BC!! He’s also the owner of Mastin Labs and encourages you to shoot in film because it is rich and full of life. Mastin Labs’ presets will help you keep the timeless look of film in a digital era.

In addition to all of his success, Kirk is genuinely one of the coolest and nicest guys around. He spent years restoring his boat and now sails around Washington, sharing his love of the ocean with his two beautiful daughters, while still being a badass photographer and business owner.

I just want to see photography that gets me excited. 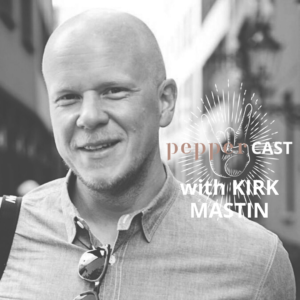 Keep checking back in because these episodes are going to be coming in hot! We really do have some of the coolest people lined up to join Stacey to talk about success in the industry and in life, work/life balance, creative entrepreneurship struggles, and everything in-between.

Make sure to subscribe to our YouTube channel so you don’t miss out, but you can also find us right on our PepperCast page!